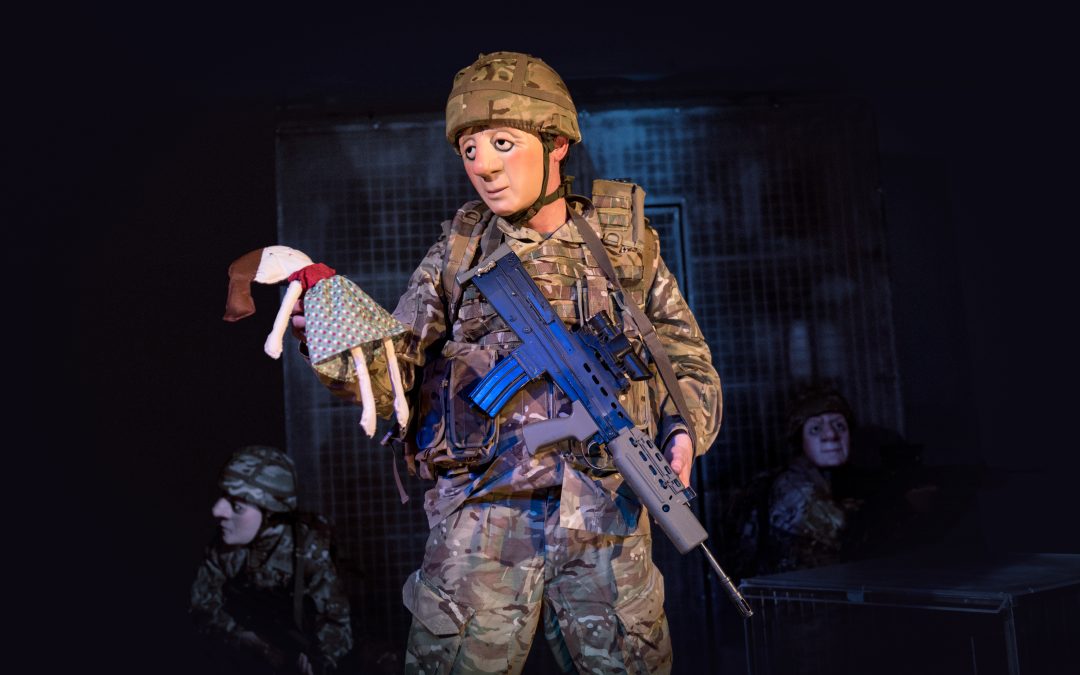 VAMOS THEATRE, the UK’s leading full mask theatre company, is bringing its compelling production A BRAVE FACE to towns and cities across the UK and Europe from Thursday 14th February running until Saturday 27th April 2019.

The tour will be going to 24 venues including Jacksons Lane in London, The Lowry in Salford, Everyman Theatre in Cheltenham, Liverpool’s Unity Theatre, Clwyd Theatr Cymru and Schlosstheater in Fulda, Germany.

A BRAVE FACE is set in Afghanistan in 2009. Under bright blue skies, a small girl stands and watches the soldier. She smiles, just like his sister…

Ryan is there to see the world, learn a trade, get a life. Training is complete, combat is a buzz; he’s part of a team and knows his job. But on one particular hot and desperate tour of duty, Ryan sees things he can’t talk about, to anyone. And then, when he returns home, the trouble really begins.

Created from two years of research with ex and serving soldiers, families and health professionals, A BRAVE FACE explores Post-Traumatic Stress, an unseen and often unrecognised injury of war, and the impact it can have on even the closest of families. With compassion and fearlessness, VAMOS THEATRE brings its trademark, wordless, full mask style to a story that needs to be told.

VAMOS THEATRE has collaborated with Veterans, serving personnel, military families and health professionals in the making of A BRAVE FACE, an honest and hugely compelling full-mask theatre production inspired by the hidden stories and personal journeys of those affected by, and connected with, Post Traumatic Stress in the military.

Artistic Director Rachael Savage has been at the forefront of the research, which has seen her meeting not only Veterans, but their families, serving personnel, and organisations and professionals who support those living with PTS.

Rachael comments, “We want A Brave Face to show honestly what PTS is and can mean to soldiers and to their families, who often find themselves on the frontline in coping with the condition: they deal with the trauma, as well as instability, social isolation, loneliness – often with no support. The input of those who have helped us make the show has been invaluable – at every stage their generosity continues to be extraordinary, particularly those for whom discussing PTS can be in itself traumatic.”